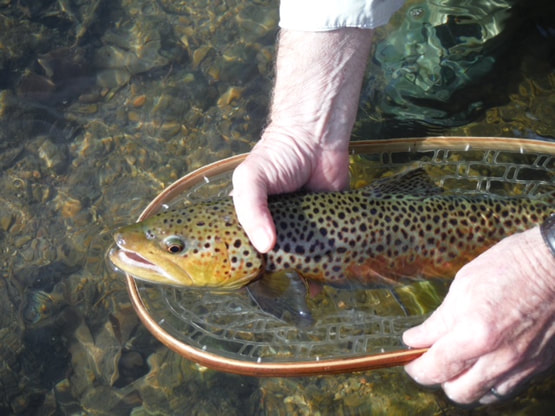 ​
​Located near Waynesboro, Pennsylvania, we own and have access to over two miles of outstanding trout water on the East Branch of Antietam Creek and its major tributary Red Run. Our waters have their beginning on South Mountain, flowing into the Cumberland Valley, influenced strongly by a large number of limestone springs. As a result of this mix, we have aquatics that combine the best of both limestone and freestone streams. A multitude of Wild Brown Trout can be found in both Red Run and the Antietam. Rainbows and occasional Brook Trout are in our waters. May and June have outstanding dry fly fishing, starting with sulphurs and ending with yellow drakes.
​
Our season begins with nymph and streamer fishing, with some early dry fly action on blue wing olives on a cloudy day. This is a good time to bring in a Brown of 20" or more!  May and June bring great fishing; a typical morning can start with nymphs or a streamer, then later in the day turn into dry fly action on caddis or mayflies. In mid-summer, with the exception of some caddis, the hatches are mostly over, but very good dry fly fishing begins with ants, hoppers, and other terrestrials. Fall brings the opportunity to catch large colorful Browns moving upstream heading for the many small tributaries to spawn.

CATCH AND RELEASE ONLY

GUIDED PARTY HAS EXCLUSIVE USE PER DAY

WE REST OUR WATERS TO PROVIDE QUALITY FISHING